Step 3: Retarget Prospects with Case Studies to convert them into New Customers.

From the launch of the first true social media site Sixdegrees.com in 1997 and until this day, social media connected more than half of the world’s population.

Who are these people? Which platforms are they using? What’s in the future for social media?

It’s hard to get into the deets and describe more than half the world’s population to you, but I gave it a go. In this updated roundup (13 June 2022), I’ve compiled every stat you’d possibly need if you’re researching social media usage.

Check out and learn how enormous social media has been getting.

How many users does social media have?

In January 2022, there were over 4.62 billion people using social media globally, with the typical user using 7.5 social media platforms on a monthly basis. Compared to the previous year, the number of social media users has risen by 10.1%, which equals 424 million additional users in a year.

Number of Monthly Active Users vs. Number of Accounts

Many people have set up several accounts throughout the social media platforms, so counting the accounts wouldn’t represent the real picture at all. Even the platforms themselves have a hard time counting users due to individuals creating multiple accounts. Facebook’s report, issued in October 2021, stated that in the sample of 5000 newly opened accounts, as much as 56% were set up by existing users. It’s nearly impossible to find out how many accounts in total have been opened and closed through the years.

Luckily, data scientists know how to do their job and provide the most accurate measurements they can to include in research. The correct unit for metrics in social media demographics is a Monthly Active User or MAU. You’ll see this abbreviation often, so keep it in mind. The number of accounts and the number of monthly active users are, obviously, vastly different in value and meaning.

It’s been estimated by the CEO of Good Trust, the after-death digital estate planning industry leader, that there are more than 10 million and up to 30 million dead people only on Facebook.

With roughly 2.93 billion monthly active users on Facebook, 30 million represents more or less 1% of users. I guess that sounds about right?

People usually don’t put the destiny of their social media accounts on the “After I Die” To-Do list, so they simply stay up there. Facebook, for example, must’ve noticed the matter and offered two solutions: you can either turn the accounts of your close ones into memorials, or they can be flagged to be deleted. You can actually even put it on the To-Do list and set up your preferences yourself. Yes, you can set up what will happen with your account after you die, and even choose a trusted person that will take over.

What are the statistics for social media?

What percent of the population uses social media?

Geolocation is one of the key factors in the rate of social media adoption. The ratio between the social media users and the total population of specific world regions varies greatly.

What is the percentage of social media users compared to the total population in different regions of the world in 2022?

Which generation uses social media the most? The answer is exactly what you would expect it to be. But! The gap between generations is narrowing through the years. I remember the times my grandma wouldn’t even know how to turn on the computer, now she’s becoming one of the Facebook doctors. Congrats on your diploma, grandma!

What age group uses social media the most?

The biggest users of social media are 20 – 29-year-olds, followed by 30 – 39-year-olds. Gen Z and Millenials have been going at it from a very young age and are complete digital natives. Other generations still have to learn, since they’re either younger or older. It doesn’t come as easy as it seems.

I find it interesting that in the younger generations there are more males than females active on social media, but in the older generations ratio between the genders equalizes or the number of female active users even prevails over male ones.

What percentage of teens use social media?

What is the most used social media platform in 2022?

As of January 2022, Facebook is still leading the social media platform charts with 2,91 billion active users around the world. Out of 4,62 billion active social media users over 62% actively use Facebook. Followed by YouTube with 2,56 billion and WhatsApp with 2 billion users, the three topping platforms carry a gigantic mass of people.

How many users does FB have?

How many users does TikTok have?

As of January 2022, TikTok has 1 billion users worldwide.

TikTok is a social media app that was launched in 2016. Since then, it has become one of the most popular apps in the world. The majority of TikTok’s users are young people between the ages of 16 and 24. TikTok is available in over 150 countries and in over 40 languages. The app is particularly popular in Asia. In China, where the app is known as Douyin, it has over 600 million active users.

TikTok has been praised for its engaging and creative content and its user-friendly interface. The app has also been criticized for its lack of privacy protections and for its role in the spread of misinformation.

What social media is used the most globally?

What social media is used the most globally: By gender

On the global level, it’s been found that distribution between female and male users varies depending on the platform. As of January 2022, the statistics are revealing the following findings:

Apparently, Snapchat has something that’s closer to the female and not as close to the male audience. Given that most of the active internet users are represented by men, that could also be a factor here.

What social media is used the most globally: By age

Although the overall use of different social media platforms is similarly distributed across generations, some generations use some platforms more than others.

What social media is used the most in the US?

What social media is used the most in the US: By gender

What social media is used the most in the US: By age

Similar to the global stats, younger generations in the U.S. represent the biggest share of active social media users.

Out of the total population of 18 to 29-year-olds 84% said they use at least one social media site. In the age group of 30 to 49-year-olds 81% use social media. For these two age groups, it’s interesting to see that compared to 2020, the number of active social media users has decreased in 2021.

The youngest adults represent the biggest users of almost every social media platform – apart from LinkedIn, Pinterest, WhatsApp, and Nextdoor. That’s probably due to not being settled down in terms of jobs and housing as much as the older generations. The platforms they are using the most are YouTube and Instagram, Facebook, and Snapchat.

Counting the number of active social media users only tells that they’re using social media. But which social media do they enjoy the most? Which one is the people’s favorite?

It’s depending on many factors, but here are the favorites based on gender, age, and country:

How fast is social media growing? 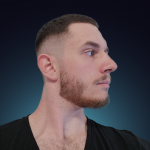 Physicist turned SEO Content Marketer. For the past few years, Mihael worked with many big SaaS and service businesses helping them rank higher and get more customers. Now here to share his secrets on how to make hyper-profitable blogs in hyper-efficient ways.

“Mihael is a digital marketing mad scientist. He’s a sharp marketer with high energy and lots of ideas. The work he did leveled up our whole team.”

Saying that Mihael is a content marketing guru is an understatement. His attention to detail is on another level. He doesn’t give room to the slightest mistake and makes sure each piece is the best out there.

Mihael is brilliant, organized, considerate, and honest. A rare mix in today’s world. He is extremely analytical and can grasp complex topics quickly. If you’re looking to grow your blog, listen to Mihael – he knows what he’s doing.

Didn’t find what you were looking for?

Drop me a line below

Manage Cookie Consent
To provide the best experiences, we use technologies like cookies to store and/or access device information. Consenting to these technologies will allow us to process data such as browsing behavior or unique IDs on this site. Not consenting or withdrawing consent, may adversely affect certain features and functions.
Manage options Manage services Manage vendors Read more about these purposes
View preferences
{title} {title} {title}